One of the primary functions of this website is remembering not just the vessels lost in Alaskan waters but the people lost with them. That information is not just historically interesting, it is important to families and their descendants when a loved one is lost to maritime disaster in Alaska. With that in mind,  I have posted a new, never before seen list of 461 names of people that may have been lost when the Princess Sophia sank in 1918. The official counts vary from 343 to 356 persons lost.  The Sophia is Alaska’s worst maritime disaster to date.  There were no survivors, with the exception of one of the passenger’s dog. What I have done to to arrive at such a large number of people lost relative to the official count is to include all names that were published as passengers or crew lost when the vessel went to the bottom. I used newspaper publications from Alaska, Oregon, Washington and British Columbia. I also included the most comprehensive list published in book form. None of those lists appear to have ever been complete. There are just too many names. Many of the names on my list are of people whose bodies were identified but never included in the official count.  This list is unofficial and likely incomplete, but may prove helpful for locating a missing ancestor. Now that the list is published online, the names will come up in searches.  For the complete list go to the A to Z section and pick the letter P. Once there scroll down to PRINCESS SOPHIA. At the end of the list is a link to download the complete list, color coded and in .pdf format.

This website is far from complete but contains thousands of pages of useful information about Alaska Shipwrecks.  ALASKA SHIPWRECKS is now available as a pdf file book that can be purchased and downloaded.  Just click on the book store link on the right side of this page and you will be directed to the Alaska Shipwrecks Bookstore page.    Thank You for Visiting and Smooth Sailing….  Captain Warren Good

Many thousands of boats and ships have keeled over and been lost in Alaskan waters.  Along with those were thousands of crew members and passengers who lost their lives with little or no warning.  A good percentage of the tragedies have no known evidence to be reviewed to prevent the same disaster from striking again.  Alaska hides her violent past within a rugged marine wilderness and treacherous weather environment.

In addition to the lives lost, there are tens of thousands of lives that have been changed by the psychological insult that an Alaskan Shipwreck provides. By my estimates there are between five and ten thousand living Survivors of Alaskan Shipwrecks.   If you are one of those shipwreck survivors, your story needs to be told.  You may unknowingly hold the key to preventing another loss of life.  You may remember an odd or bizarre thing that happened during the wreck that may be very important.

It is within the realm of possibility that the documented explanations of many shipwrecks are slightly short of the mark when it comes to explaining the exact circumstances that led to disasters being reported.  Government agencies shouldered with the responsibility of documenting maritime disaster often use expressions like “operator error”, “unstable due to overloading” or “captain was disoriented” to explain a loss.  They are catch-all phrases commonly used when something unexplained happens and often no survivors are there to tell the story.  “Unexplained” is not an acceptable answer on agency forms that must be filled out for a shipwreck report.  If you saw, experienced or were told about a shipwreck, I would like to hear from you.  You may have explanations or a piece of the puzzle that you may not be aware of.  No matter how minuscule the observation or ridiculous the information, I would like to have the chance to compare your story to other stories I have heard or seen.  It could be very important.  Nothing sent in will be posted without your consent.

This is about saving lives, not making headlines.  I have been working at this Alaska Shipwreck project for more than three decades.  I have studied all the known shipwreck reports and lists from the past 200 years.  I worked in the Alaskan commercial fishing fleet for several decades as well.  Many of my close and personal friends disappeared or were lost with little or no explanation.  Some of the explanations given on the formal reports just don’t fit the circumstances in cases where I have personally known the captains and crews lost.  I am desperate for explanations.  Tell your grand kid the story and let them send it in.  I don’t care, just send it.  Nothing can be posted on this alaskashipwreck.com site without my approval.  Thanks in advance…Captain Warren “Pogo” Good

One of the primary objectives for this review of the shipwrecks of Alaska is to shed more light on all of the marine disasters that have taken place.  Obscured by time, many of the mishaps and disasters have been forgotten.  Unfortunately the factors that led to them still lurk and humans still make mistakes.  Several important purposes can be served by a thorough evolutionary review of Alaska Shipwrecks 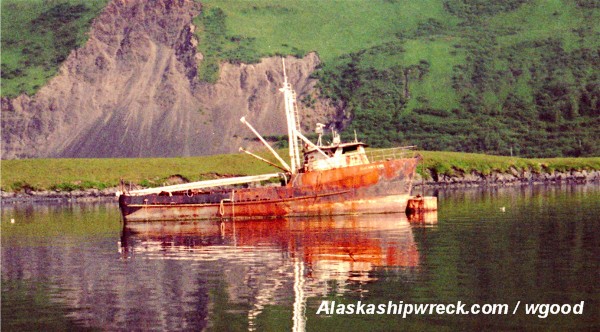 Alaska Shipwrecks is a work in progress.  In time it will include a review of all losses of life and vessels in and near the navigable waters of Alaska.  It is a preview of an Encyclopedia of Alaska Shiprecks I will publish in the future.  I dedicate this site to the memory of my many friends and acquaintances lost in and around the Alaska Commercial Fishing Industry who left port and never returned.  If you knew someone who was lost please remember them by posting at the end of the page where their loss is noted.  Thank you all who visit this Alaska Shipwrecks site.  Please respect copyrights.  Warren Good